I started programming when I was pretty young.

When I was about 15, I discovered C. I started playing around with this programming language and saw what I could do with it. After that, I discovered Python, which almost felt like it was love at first sight for me, and I haven't stopped working on Python ever since.

I really enjoy learning about whatever I can get my hands on. And I love to delve into it and figure out what makes it tick, and maybe even take it a step further. Divergence has definitely given me the opportunity to do that.

In the army, I was a member of the infantry. Back then, I had grand plans to go through the Ranger Program and eventually work for the CIA. It was my dream to do something cool and action-packed like the things Rambo does in movies. I think that's a common thing that a lot of people that join the infantry aim to do.

While I can say I had a lot of fun during my time in the military, I can tell you that the idea of being Rambo is a lot better than what happens in real life. A lot of running and yelling.

I realized, then, that the military ultimately wasn't going to serve my career goals and everything else I wanted to accomplish. The time I served definitely set me up for a very successful future, and I will always be grateful for that. But, in the long term, it just wasn't my cup of tea. 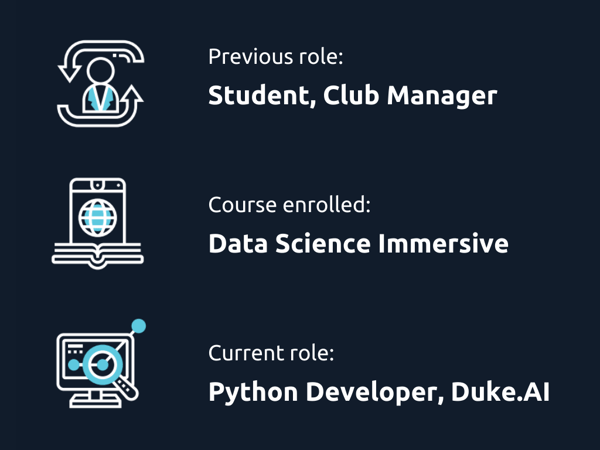 My interest in AI started with robotics.

I've always been intrigued by robotics and various things that can be automated. With the way that the whole world works these days, everything revolves around data science.

When I turned 18, I started a small manufacturing company right out of high school. The business mainly focused on plastics manufacturing and because of that, I discovered Arduino, which is an open-source programming platform.

In a nutshell, Arduino is a small, programmable motherboard. It's similar to programmable logic controllers (PLCs), which can process a lot of objective programming code such as C++. You can have those PLCs send out different pulses with modulations to different kinds of servos and steppers and other things.

I started automating a wide array of pneumatic and hydraulic cylinders as well as various processes. This let me manufacture products a lot faster and more accurately at a fraction of the cost. There was even a time when my laboratory, which I built in my garage, looked like it belonged to a mad scientist. At the time, it was filled with a bunch of little robotic arms performing various tasks.

When I found Divergence Academy, I actually wasn’t aware that my VET TEC education could fund my interest in this field.

I learned from some help portals on the VA website that there was a school that offered data science. That really piqued my interest.

The only real challenge that I faced at the time was a scheduling conflict. During my transition into the Data Science Immersive course, I was still managing nightclubs at night.

But since my heart was set on furthering my education, I quit that job and dove into my studies with both feet.

I realized that there are still so many things that I don't know. But that just goes to show that the room for improvement and growth in this field is exponential.

I have a lot of respect for my instructors and the people that I studied with at Divergence. Drew Minkin, for instance, is a wizard of a teacher. He’s incredibly knowledgeable on practically everything involving data science. And honestly? I really couldn't have lucked out more with the instructor that I got.

It also goes without saying that all members of the staff at Divergence are amazing. My classmates were cool and they all had eclectic backgrounds and different specializations. Overall, it was a really great learning opportunity and I had an awesome time studying at Divergence.

Divergence gave me an engaging, hands-on learning experience that I can’t get anywhere else.

Outside of watching a lot of educational videos on YouTube, I’ve also used online learning platforms like Udemy and Coursera. And while I'll always be a self-learner, I'll never undervalue learning from people like the instructors that I had here. They are the veterans of this industry. They have a deep understanding of what they're talking about and the different intricacies of it.

My DSI capstone project served as an informational directory of real estate data - which, truthfully, I had a little too much fun with.

To accomplish that, I embedded machine learning algorithms for the real estate market into the application. As a result, it could be used by people to get predictions on the future of rental and mortgage prices by state. It was my budding platform for what I'm working on now, which is similar but a bit more complex and powerful.

Right now, I'm building it into a program that self-replicates machine learning algorithms. Because, of course, with data being pretty much everything that drives the world now, the value is in the data as well as the software that processes it.

The program I’m building will replicate machine learning algorithms for people's individualized questions and a certain market that I'm not at liberty to talk about yet. Depending on user input, we'll create an algorithm for that data set. And then the program is going to compile all that data into the cloud, and just accumulate massive amounts of machine learning data for it.

To view Blake's capstone project on GitHub and Power BI, click here and head to the 'Featured' section of his LinkedIn profile.

After completing the program at Divergence, I was given an opportunity to work with a company called Duke.AI, which is focused on automated bookkeeping.

For the most part, their focus is on applying artificial intelligence to the transportation industry. Their goal is to expedite payment processing and all the paperwork that they deal with. It is a project that involves a lot of Python automation.

I got my Amazon Web Services (AWS) certifications because all of Duke’s data is deployed in the cloud on AWS. My experience with Duke is going great so far, and I really enjoy working for that company.

As of now, I’m still on an internship with Duke.AI, which I got through Divergence’s Bowsprit initiative. I count myself really lucky to have gotten a spot, because I didn't even know how big of a deal it was, until after I was already doing it.

Everything that I learned at Divergence, I’m currently applying to my job at Duke.

Every day, I get to take what I learned about the science of analyzing, transporting, and manipulating data and use it in a way that other services can ingest it.

If you think about it, my education at Divergence is being applied across the entire lifecycle of different ends of the application from the user to the back end, and to what the data has to go through in order to make it from one point to another.

The work I do at Duke is pretty broad—it's got a lot of intricacies and various nuances to it that I wasn't familiar with firsthand.

Prior to this experience, I had admittedly never worked with such a widespread remote group of developers. Mostly, I've always done small side projects focused on something specific and narrow with maybe one or two other people.

I consider myself lucky enough to have the training and the aptitude to adapt to it and learn with it. That was a bit of a curveball but I'm definitely happy that I got to experience it.

While my internship with Duke is about to end soon, I have a strong feeling that I will end up getting an offer from them. Nothing is set in stone for now, but I am very hopeful.

For learners coming into the Bowsprit program, expect to get a couple of curveballs.

If you’re training on AWS, maybe the company that gives you an opportunity is going to be Azura and you’re going to have to be willing to change gears and adapt. If you don't get exactly what you want on the first try, chances are, there's something better on the other end that you don't know about yet, which is exactly what I'm experiencing now.

I would suggest mentally preparing yourself for constant study—it's a simple yet extremely effective trick. With AWS, the most important thing to focus on is getting to know what their services are called and what each of those does because you're probably not going to use all of them.

As far as adapting to a new company opportunity for somebody in the Bowsprit program—I think there's so much to learn.

With countless professions and specializations within this industry, you’re not going to be a master of any one field of expertise. You could get hired for a job involving something that's adjacent to what you know or completely new.

Be ready to change gears and go with the flow and trust that everything will be fine since most of the skills you learned will probably translate over to your new task.

Divergence really gave me the stepping stone I needed to prove myself.

I’m not trying to make it out to be something beyond what it really is, but I have to give credit to this program. Divergence really made my entire career take a complete 180.

For over a decade, my goal has been about getting my foot through the door of this industry. I initially felt disheartened about my chances of making it in this field because I didn't go to college for it. There are a lot of companies that would brush you off as the wrong candidate for the job no matter how skilled you are just because you don’t have a degree.

Now, I'm in the position that I've always wanted to be in. I can proudly say that I have years of experience in the field and that I completed this program.

Finally, to future learners coming into the DSI program, I’d like to say: be patient with yourself.

I know there is a lot to take in. Especially on an immersion course, you’re going to experience a flood of information from start to finish.

Focus on those points that interest you and apply to what you're trying to do. Play to your strengths, and everything else will fall into place.

My name is Don Snyder, and I've been in the workforce for about 20 to 25 years doing all sorts of...