My name is Michael Williams and I am a United States Army veteran.

I was a 91 Foxtrot, which involves small arms and artillery repair. After leaving the army, I went to Penn State University where I got my bachelor's degree in theater. I worked professionally as a scenic carpenter and an occasional actor. I also worked in the service industry to supplement my income.

When the COVID pandemic started, a lot of things began to change for me.

I started losing a huge chunk of my income because theaters were getting shut down and certain services weren’t being required at the time. Given all that, I needed to find a new source of income, which is why I started considering a new career.

As luck would have it. I had a friend who completed a bootcamp himself, and was recommending that I try out IT. I started doing my research and was initially going to pursue a coding bootcamp; however, coding didn’t feel like the right thing for me.

I looked into doing a cybersecurity bootcamp and it felt that it would be a better fit, as I saw cybersecurity as a nice blend of getting to do something logical and creative at the same time. 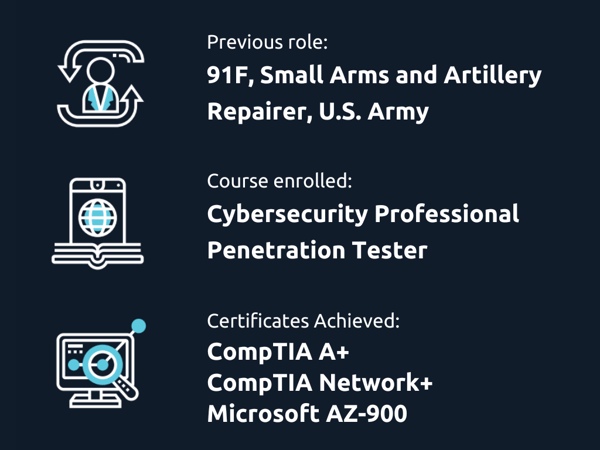 I discovered Divergence Academy through the VET TEC program.

While looking into the VET TEC program, I discovered Divergence Academy listed as one of their preferred providers. What really made them stand out was how good their staff was at reaching out to people. They gave me and other learners pre-course materials to help us prep, which was especially helpful since I was a person coming into cybersecurity with no IT experience.

I felt drawn to the cybersecurity pentester program because of its expert-led instruction.

I enrolled in the Cybersecurity Professional Penetration Tester (CPPT) course. And what really struck me as interesting about the program was that the instructors weren't just university professors—they were all industry professionals too.

They put a heavy emphasis on doing practical labs instead of just teaching. And I really appreciated that, because while lectures and similar materials are pretty easy to get on the internet for a relatively low price, it's a lot harder to get those labs and practical experience anywhere else. That's what drove me to Divergence Academy.

My time at Divergence was very interesting. Let me be upfront—the cybersecurity bootcamp was very challenging.

There were definitely days that were very difficult because I came in with no prior experience. But what helped was that we were broken up into these small groups, where we would work on our labs together. Everyone in the group was helping each other out in any way they could with either studying or certification prep. That was one of the biggest things that helped me out a lot.

Aside from that, I appreciated getting one-on-one time with the instructors. They were happy to walk me through the lessons and go into further detail. If our instructors could tell everybody was getting the lesson or if someone asked about a topic outside of the curriculum, they would take it to that next level.

They weren’t just covering what was in the predetermined course—they were willing to go further in depth. That was the quality of instruction they felt we deserved.

Practical labs were the most exciting part of our curriculum.

One of the things that we got to do that I found very surprising was in our network tools and technology section. We actually got to build an entire network logically through GNS3.

We built that from the ground up from setting up servers to building our connections and establishing our firewalls and access control lists. And that's a huge achievement, especially if you don't have hands-on experience to start with.

When we got even further into the course, we had the pentesting section, where we were set up with a team. They have an entire network that we worked through to find as many vulnerabilities as we can. It's as close as you can get to a real-world penetration testing scenario—and it's all hosted through Divergence.

This course gave us access to a custom lab that's ever-changing and ever-evolving. We got to try different things like SQL injection, gaining root access to your routers, and pivoting through the network. That was something that I was surprised that we got to try instead of just isolated labs—it was a whole scenario we got to play out from start to finish.

After the scenario, we got to write up the assessment just like if you were working in an actual pentesting company. And at the end of these labs, we had to present our assessment to the instructors just as anyone would in the real world. I think, best of all, was how the labs were considered a huge project that we were able to put on our resumes.

Some of the skills I learned in the military translated over into cybersecurity.

One of the things that I had to do a lot when I was in small arms and artillery repair was troubleshooting weapons issues. We had a methodology that we use to break down the problem and find the root cause of why your weapon wasn't working—the exact same principles apply to basically any sort of real-world IT problem. I appreciate that I was able to take that fundamental knowledge and transfer that over to the IT world.

Aside from that, having a background in theater made me more confident as becoming one of our group leads. That confidence also helped me whenever I presented our group’s pentesting assessment to the instructors for our capstone project.

Learning the industry terminology was the biggest challenge for me.

There’s a lot of terminology and a ton to learn when it comes to diving into it. What helped with that was honestly just the repetition of doing it day-in and day-out. It was also challenging to take extra time to study outside of class because you're there from nine to six, and that's a full work day. But, if you want to go that extra mile, I would recommend taking that extra hour or two each night and just going back over stuff over and over again. And then, it all begins to stick and it all builds off of each other.

I have tried other online learning platforms but Divergence is above the rest.

I have tried different online platforms before for education. I actually started by going to American Military University when I was 19, doing their online college degree. It was a very different experience from Divergence because—for one—there were no set times for classes. You just needed to log in and do your tasks whenever you could.

There also wasn't a lot of one-on-one time with the instructors or working with your teams in a group environment. While there were times when we would try to do something in groups, it wasn't as in-depth as what you get at Divergence Academy.

At Divergence, you're set on a specific schedule. It feels a little bit like you're going to an apprenticeship and like you're doing a nine to six job. You work with the same people day-in and day-out, and you're all working on the same stuff.

I think that helps give you the structure that you need, especially as an adult learner. We all get busy and it's so easy to put that time towards something else or spend your day watching stuff on Reddit and learn a new field, which I found very helpful.

My biggest takeaway from the Divergence experience is that people in cybersecurity are lifelong students.

Cybersecurity and IT in general are ever-evolving industries. There is always something new to learn. We're always learning new technologies and that's why you'll see different industries releasing newer versions of certification exams. They expect you to continue working at it. That's what I found really exciting about doing it and working with Divergence.

Life after the cybersecurity bootcamp has gone pretty well. I was able to find employment relatively quick.

I’m still doing lots of certification prep—that never really stops because of the ever-changing nature of our industry. But I've definitely found my footing in the IT field relatively quick thanks to Divergence.

This experience and this course changed everything for me. They helped me transition into a completely different field within a six-month period. Their bootcamp was truly life-changing.

The pre-course material Divergence gives new learners is a godsend—especially if you have no prior IT experience.

To future learners, especially if you're new and you don't have IT experience—take your pre-course work very seriously. Take as much time as you need to get those fundamentals down because if you learn the terminology or at least some of it, when you come in, you're going to have a much easier time adapting to what can be a lot of material to learn very quickly.

Aside from that, just keep working on those certifications. That's a really big thing in our industry.

One of the big things that diverted stress was their alumni program. You find that even once you're done with the training, your time in Divergence isn't really done. They're still there, helping you with job placement, getting your resume ready, and coaching you for interviews. There's events where people meet up and work on additional stuff that is even a bigger scope than what's just taught in the class. And that's something that's really exciting.

I started programming when I was pretty young. When I was about 15, I discovered C. I started...