I’ve always had an interest in computers and hacking.

Growing up in Temple, Texas, my dad pushed my brothers and I to excel in math and science. So as a kid, while my English skills were terrible, I could get in and out of any technical device pretty much on-demand. 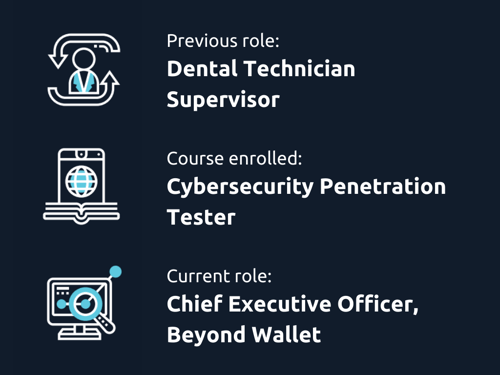 After graduating high school, I was originally looking to pursue international business in Miami, but my dad said: “No, you're going to the military”. So, I joined the Air Force as a dental hygienist and served for a time in Heidelberg, Germany. There, I eventually pursued a degree in international business. That was a great experience, because I got my education and I was able to network with a lot of people.

Now, I’m the founder of a FinTech company called Beyond Wallet. In a nutshell, we are the most secure way to send money domestically and internationally, but we also offer merchant services and payroll services free of costs.

I discovered Divergence while I was looking up schools when I was moving back from Germany.

I looked up schools accredited through VET TEC, and I was impressed with the way Divergence outlined their cybersecurity pentesting program. I also looked up the different instructors for the course, and I found it amazing that all the instructors had accomplished something major in their career. The experience and resumes of those whom I’ll be learning from alongside the friendliness of the staff is what got me.

When I finally got back to the States, I was invited to tour the campus with some other students. This was right before COVID hit, so I saw first-hand how things were set up and what technologies were being used. We even got the opportunity to sit in on some of the classes to see how they went.

At Divergence, you’re learning core foundations from people who have real-life experience.

It’s important for me to learn from someone who has done what they are teaching. These are people who are in the field, doing the work, and who are constantly keeping their skills up to date. So, every question in class pertains to what you're going to be doing when you’re on the job.

It’s very different from college where you go line-by-line on the material. At Divergence, they give you the material, but you're also learning what to do on the job. They give you the foundation, and they also provide examples of how they might show up in real life. I think the biggest thing you want to teach somebody is what they are going to experience in a work setting versus a textbook example, because technology is always changing.

What I appreciate about Divergence is that they try to work with everyone. You can be a beginner or someone more experienced, but no matter where you are, you're going to walk away from the program having learned something. In my cohort, there were people who only did cybersecurity as their field. And then you had people that were brand spanking new to this industry and had never touched a computer in their life. And these people didn't quit, because they were working and learning at such a comfortable pace.

At Divergence, it’s not just about the numbers, it’s actually about helping people learn something. You can see that with how small the class size is—intentionally designed so that everyone can receive individualized attention and the opportunity to learn one-on-one from the instructor.

Graduating with a network of peers was a huge help.

A lot of tech people are introverts. They won’t get out there and network and connect, because they are the kind of people who like to keep to themselves. So, connecting with the people in my cohort was great, because we all decided that we were going to help each other.

We would ask each other what jobs we were applying for; what kind of careers we were looking for. That’s important, because you can’t come out from the program and give up when you don’t get the job at the big company you applied to. You have to understand you’re a newbie in this field, so you won’t be getting that high-dollar position you might be hoping for. But you have to start somewhere.

After Divergence, I actually switched to human resources at a company called ProCollect, where I was one of three people in the human resources department. While there, the people I worked with took note of my computer skills. So I used everything I learned from Divergence and let them know how to improve their system. That became my primary job.

At the same time, I was also working with Divergence to help with veteran outreach and support. I learned that a lot of vets love talking to other vets, especially when you get a veteran who can support them with resume building and job search. Some of them were just excited that Divergence was reaching out and continued helping them even after they graduated. So that’s a big plus.

Divergence provided me with the foundations to set up my company.

In FinTech, most people don’t understand the apps that they’re using, the data they’re collecting, and just everything that’s going on. With the skills I got from Divergence, I can now pick apart all what existing FinTech companies are doing, find out the security flaws, and build a company that's more secure.

Now, we have proprietary software that has military grade encryption. We don’t collect data. We’re simply breaking down walls of all these companies to help the general population. So I would say that education helped me see all the flaws in today's finance world.

I’m inspired by people like Elon Musk. I consider myself an entrepreneur. I just want to do my own thing and help people out.

Come in with an open mind, be ready to learn, and then apply it while you’re still in class.

The biggest takeaway is applying the knowledge you’ve gained early. Because when it’s time to step out and get a job or start your own thing—you’re ready. That’s the biggest advice I can offer to new learners.

I started programming when I was pretty young. When I was about 15, I discovered C. I started...