I decided to go into cybersecurity because of a few things I saw when I was overseas on deployment. Ever since then, I've had a tech itch.

My name is Brandi Moses, and I’m a former active duty member of the Air Force where I served for six years, before I joined the Georgia Air National Guard for four. After that, I worked on government contracts for five years as a drone mechanic.

As a jet mechanic, I have touched every part of the F15. I’ve been a sheet metal mechanic, a draw mechanic, and a satellite mechanic. I’ve probably worked on every type of aircraft that you can name.

I'm a person who has always tinkered with stuff. As a kid, I worked on VCRs and TVs. I was really inquisitive as a kid, and I tried to figure out how things worked.

There are people in and outside of the military that have helped guide and mold me into the person I am today.

A person who really made a difference was one of the engineers at my last job. He actually gave me the courage to go for Divergence. When I expressed interest in Divergence’s Cybersecurity Pentesting program, he told me: “You’ve got to do it now. NOW, Brandi.” I will forever appreciate him for that push.

When VET TEC rolled out about five years ago, what caught my attention was that as long as you were getting into the IT field, they would pay for your schooling.

I was in the Georgia National Guard while I was working on my Business Administration degree. Then deployed which meant I had to quit school.

I came across Divergence while looking at different VA programs. My GI Bill® had run out, and I wanted to see what my options were. Then the VA came out with the VET TEC program, and I found out that as long as you had at least one day left, they would cover your schooling. I had 31 days left.

Once I decided on Dallas, I reviewed the schools there which is how I found Divergence Academy. I believe Divergence was one of the few very schools in the States that had a cybersecurity program available at that time.

Admittedly, when the program migrated online due to the pandemic, I was kind of sad. I was really excited to start classes on campus! I even made a trip out to see the school and experience Addison. Everyone I met on campus was so nice.

Divergence showed me I could still get that sense of camaraderie I had in the military after I got out of the military.

When you leave the military, it can feel lonely. You start missing the camaraderie. That’s what I was looking forward to with starting classes on campus with other veteran students. So you can understand my disappointment when everything transitioned online. But even with remote, distance learning, I didn’t feel “alone”.

At Divergence, your cohort is made up of folks from different branches, ranks, and creeds. Because you are all veterans, there’s that sense of doing this program together and helping each other out. That helped a lot.

My cohort was really cool and supportive. We talked on a regular basis - almost every day for four months. Even now, we continue to reach out to each other via LinkedIn and on Teams. It was a supportive group where everybody helped each other learn.

It was great to have instructors who were willing to take that extra step if you needed something, or if you didn't understand the material outside of class.

Divergence’s instructors were cool and knowledgeable. Among the ones I learned under, Logan and Shane really stood out. Logan told us time and time again that if we needed any help, we could call him or hit him up on Teams. Shane was the same way—he was invested in our learning.

There were moments when the rest of the class got it and I didn’t. I would call the instructors directly, and they would always find time to walk me through the material. I really appreciated that.

Career Services helped tailor my resume for the civilian sector.

After the course, I attended the Industry Day Lunch & Learns religiously. My resume was a standard military resume. Coming from a mechanic background which didn’t involve as much screen time, I didn’t understand how to position my skills in a way that transferred over to my current career path. Working with Divergence’s Career Services meant being able to successfully translate all those soft and hard skills.

On another note, I also wasn't a fan of LinkedIn initially. In the military, you just do your work. Everybody in the military already knows what skills you possess. There’s no big announcement, no “showboating”— which is why it can be difficult for military personnel to talk about their skills publicly. To broadcast your skills on a platform like LinkedIn for the purpose of showing the world what you can do, that was a challenge.

Shane helped me understand the value of LinkedIn. He told all of us in the cohort that it’s important to have a LinkedIn account, because it will help grow your network. I went hardcore with that just trying to get myself seen. Understanding LinkedIn allowed me to network across different groups that eventually landed me a job offer.

I'm really excited to be a part of Cisco’s apprenticeship program as a security research engineer intern.

I learned about Cisco’s Advanced Security Initiatives Group (ASIG) apprenticeship program from a recruiter who reached out to me via LinkedIn . When they first told me about the position, it seemed too good to be true. They sent me the information and I had to triple check to make sure it was legit. And sure enough, Cisco had started a summer apprenticeship program for those looking to become pentesters.

ASIG is “comprised of over 65 software and hardware engineers with one mission: use advanced penetration testing tools, techniques, and practices to identify exploitable architectural weaknesses in critical Cisco products and solutions.

The team relies on design and code analysis, creates custom or off-the-shelf attack tools, and other adversarial techniques to find security issues in our products. The findings are then provided to development teams as security defects to be resolved, along with mitigation and architectural change recommendations. Where applicable, they are disclosed as PSIRT security vulnerabilities to our customers.” 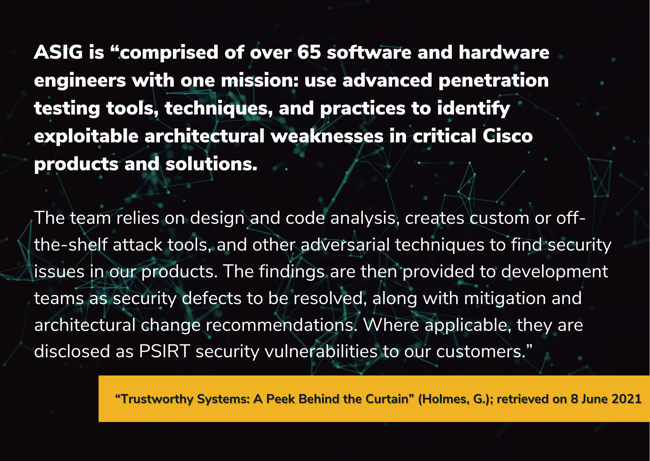 I didn't think I would be getting into pentesting. But here I am—heading into six months of hardcore training on topics we covered at Divergence. The training at Divergence definitely gives me a leg up.

At Divergence, we’re encouraged to always ask: why are we doing this?

What I appreciate with the way Divergence taught the program is that when you ask a question, you will be given an explanation for why what you’re learning is important.

I'm the type of person that needs to do it in order to learn it. Doing the labs pushed me further and brought me to a whole other level of understanding. If you’re not implementing what you’ve learned, it’s easy for the information to go in one ear and out the other. For experiential learners like myself, discussions can only get you so far.

Having the confidence to do the job you set out to do is everything.

Because of the way the military is structured, you gain confidence on the job. In my case, I gained the confidence to say: “I can fix anything. No matter what you put in front of me, I can fix it.”

When I learned I made the cut for Cisco’s program, I couldn't stop smiling. I couldn't believe it! That was the first time in a long time I thought: I'm so proud of myself. I'm proud that I tried, and while it was hard, I gave it a shot, and it worked out.

For future Divergence learners, I would encourage you to ask all the questions you want to ask.

There are no stupid questions. Do as many labs as you can. Find what you like to do. Because across the different subjects that you end up going over, you will find one that intrigues you.

I was more of a network person. I liked the infrastructure-side of tech and seeing where point A leads to point B leads to point C, and so on. Finding that out for myself brought me back to being a kid who loved to build things.

More importantly, just try. That's all you have to really do. And while I know “believe in yourself” is cliche, in the moments you feel you can't do something, tell yourself that you can and believe it. That's what you'll hear from your classmates, your teachers, and from everybody at Divergence. “You can.”

My name is Thomas Rodriguez, and I grew up in a military family.